The Eden Project is a botanical, biological theme park in St. Austell. It is the biggest greenhouse in Europe for plants and insects from tropical countries. The constant heat and humidity were the reasons for choosing hot-dip and Zinga instead of conventional paint systems. Read on to find out more.

The Eden Project currently consists of 2 biomes constructed in a china clay pit near St Austell. The biomes consist of hundreds of hexagonal and pentagonal, inflated, plastic cells supported by steel frames.

Firstly, the project was conceived by Tim Smit and designed by architect Nicholas Grimshaw and engineering firm Anthony Hunt and Associates. Sir Robert McAlpine and Alfred McAlpine constructed the project. The metal tubes were designed and built by MERO. The project took 2½ years to construct and opened to the public on 17 March 2001.

The covered biomes are constructed from a tubular steel (hex-tri-hex).  Most of the hexagonal external cladding panels are built with the lightweight thermoplastic ETFE. The geodesic concept provided for least weight and maximum surface area on the curve.

Each dome has a hex-tri-hex space frame with two layers. The geometric outer layer consists of hexagons, plus the occasional pentagon. The largest hexagon is 11 metres across. The inner layer comprises hexagons and triangles bolted together. The steelwork weighs only slightly more than the air contained by the biomes.

For aesthetic reasons, the Zinga cold galvanizing was overcoat with a compatible vinyl aluminium paint. 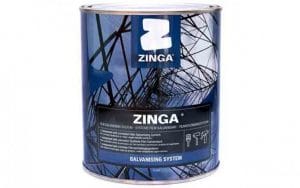 Zinga was used to repair the hot-dip galvanising layer. Damage had occurred during transport and assembly. Surprisingly, the steel tubes and joints are light, relatively small and easily transportable.

Oddly enough, the structure is more at risk of blowing away than anything. The structure uses anchors to fix itself to the ground. This is in much the same fashion as vital tent pegs!

The metalwork is at risk of flooding and water damage. This is due to the site in places sitting 15 metres below the water table.

The Rainforest biome covers about 16,000m² and is 50m high – you could fit the Tower of London inside it. The structure weighs 465 tonnes and contains 426 tonnes of air (dry air at standard temperature and pressure).

Consequently after construction, any damage caused to the hot dip galvanizing was re-protected in Zinga on site.

In conclusion, the biomes received almost two million visitors in their first year of opening. As a result, the project is now one of the top three charging attractions in the UK. Subsequently, The Eden Project is the second most visited destination outside London.

If you require further information regarding cold galvanizing complex metalwork, contact our technical team on 01462 421333.