As part of our series of articles on Zinga Cold Galvanizing paint, we would like to introduce the use of Zinga 96% Zinc at Heathrow Terminal 5’s London Underground Station.

Zinga are able to offer a 20 year insurance backed warranty. This is of course, subject to correct preparation of the substrate prior to application. We are happy to discuss details of the warranty that is on offer. Please contact our technical team on 01462 421333 for further information.

The protection of steel using different surface coatings has been in practice since steel became the most commonly used construction material in the world. Analysts believe that protective coatings today represent sales of over £6.9 billion GBP per year. Furthermore, expectations are that this will increase to £11.5 billion GBP within the next 5 years.

To the left you can see an inverted ramp fabrication connected to the positive conductor rail between the running rails. With the application done in 2006, the site opened in 2008. Funding of the new line was by Heathrow Airport Ltd, a subsidiary of BAA.

To the left you can see an inverted ramp fabrication connected to the positive conductor rail between the running rails.

Zinga 96% Zinc Cathodic Protection was used in the below formation with a system of 2 coats at 60 microns. 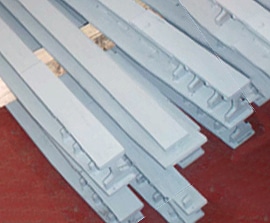 To the right, you can see the cold galvanized zinganised rails used by the London Underground at Heathrow Terminal Five.

These ramp fabrications are made of carbon steel. They have a stainless steel face (as per the drawing above). The carbon steel main body of the tracks are coated with Zinga.

These ramps provide a smooth transition for the current collector shoes to connect to the power rails.

Zinga is a one pack coating that contains 96% zinc within the dry film. As a product, Zinga 96% can be applied by brushing, rolling or spraying on a clean and rough substrate. Ideal for a wide range of atmospheric circumstances, Zinga 96% is perfect for protection to a multitude of applications including pier legs, electricity pylons, steel structures such as Astley Green Colliery (click here to see video), marine environments and more.

You can  find Zinga cold galvanizing on the LuL APR, under item no 423. The primary use within the London Underground network is Zinga providing cathodic protection to ferrous metals. This is ideal as an alternative to hot dip galvanization.

For ease of use, Zinga 96% is also available as an aerosol under the title Zingaspray. It is fully compliant with LU Standard 1-085 A2, Fire Safety Performance of Materials. This assessment has considered fire performance only and does not cover ‘fitness for purpose’ issues.

The use of Zinga avoids the need for dismantling ferrous metal structures. This is due to the ability of applying on site. The final finish forms a grey matt, non-toxic look. Zinga conforms to ISO standard 3549 in regard to its zinc purity of 99.995%. It also reaches ATM standard A780 in regard to its use as a repair coating for hot-dip galvanisation. You can overcoat Zinga with a compatible paint.

The Project At Heathrow Terminal 5

Balfour Beatty Rail Projects and Balfour Kilpatrick carried out the track work, traction power and mechanical and electrical works for the Terminal 5 railway link and terminus. It involved the creation of 10 kilometres of new underground siding for the existing lines at Heathrow Central terminal station. Furthermore, it included the managing and implementing the connections with both Heathrow Express and the Piccadilly line.

Balfour Beatty Construction was the project construction and fit-out manager for the £87 million rail station and passenger interchange at Terminal 5. The construction of both the tunnels and the new junction for the Piccadilly Line extension has involved BAA, LUL, Balfour Beatty, Mott MacDonald, Morgan Vinci Joint Venture, Tube Lines, EDF and Citylink Telecommunications.

Officially opened in 2008, the Terminal is also served by Heathrow Terminal 5 Train Station. You can find the station located beneath the main terminal. This station serves both the London Underground and Heathrow Express rail connections to the terminal. 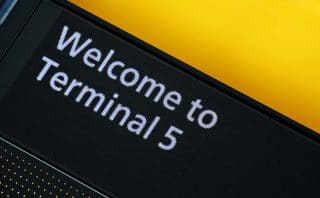 Due to the strict requirements of London Underground, with minimal time frames for application and maintenance, it is vital paint products are thoroughly tested and certified prior to specification. The enclosed environments found within tunnels and stations exasperates the situation.

As the station was a new build, London Underground had the advantage to prepare components in advance. This would help to ensure their longevity. Subsequently, it was specified that a cold galvanizing system was to be applied to the rail tracks, in order to ensure their durability.

Designed to handle 35 million passengers a year, the station needed to be up to standard to ease pressure on the M25. In 2015, Terminal 5 handled 33.1 million passengers on 215,716 flights.  Measured by passenger numbers and flight movements, this makes it the busiest terminal at the airport.

The transport network around the full airport saw an extension with the announcement of Terminal 5. This was to cope with the increase in passenger numbers. This has involved widening of the M25 motorway and the construction of new branches of the Heathrow Express. The extension of London Underground’s Piccadilly line was to facilitate the influx of passengers, with a new station built underneath the state of the art terminal. 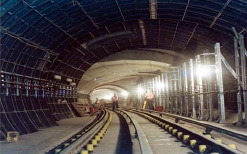 The station currently houses 6 platforms. In addition, the railway station also has two additional, currently unused, platforms for use by a possible westward railway connection. In the future, the aim is to connect these platforms to the new Crossrail project. From 2019, The Elizabeth Line will be serving Heathrow Terminal 5.

The station opened on 27 March 2008. Architects HOK International designed the station in conjunction with Rogers, Stirk, Harbour & Partners. The building cost £4 billion and took almost 20 years from conception to completion.

‘This is a major mile stone in the delivery of the new Piccadilly Line extension to Heathrow Terminal 5. From March 2008, passengers will benefit from faster, more frequent services on the line along with increased capacity. This improved service will underline that public transport is the sensible choice for travel to and from Heathrow airport.’

Interested in the use of Zinga cold galvanizing for London Underground or other rail systems? Contact our technical team to discuss requirements on 01462 421333.