The majority of the GEC’s transformers were sited externally within the grounds of their power stations. Any damage to the original coating was generally caused by bad handling while in transit and whilst being sited. With units varying from 200 to 500m2, the contractor needed to find a replacement topcoat that would ensure protection against the harsh elements found in coastal and warmer climates located in the UK and abroad. With all the heavy handling of the transformers, they had become damaged. Typically after roughly two years from coating, Coopers factory would get a maintenance call. The site would report that an external transformer is now showing signs of rust and attention is required. This would need to be carried out before the surface becomes damaged and unsightly.

An experienced two man team were dispatched to various locations around the world. This was to carry out localised repairs to the industrial transformers. If it was found that the work required to remove the rust and apply a new protective coating did not make economic sense. The complete transformer unit would be decommissioned and returned to the UK where Coopers factory would remove the existing coating, carry out any derusting required before applying the OEM coating. GEC had specified a primer coat known as Ching. This is a two pack, water based epoxy manufactured in Germany.

GEC had not specified a top coat. Cooper’s were left to their own choice of which top coating to use. After lengthy discussions with Promain’s technical team, several coatings were suggested. These included replacements for the specified primer with a primer that offered superior adhesion as well as offering greater protection against not only cold environments but areas of high UV and coastal air.

Upon trial applications, Rust-Oleum’s Rust-O-Thane 9200 was chosen as the most suitable topcoat for the project. 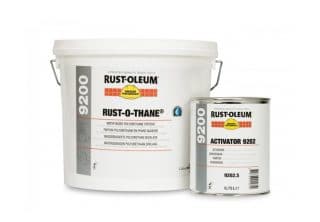 Rust-O-Thane 9200 is a water based polyurethane tintable topcoat, with high UV resistance and colour retention properties. Ideal for use on floors and steelwork, 9200 is highly resistant to abrasion and chemical attack making it an ideal coating for external use on heavy duty transformers.

To ensure the longevity required, any transformer returned to head office was subject to SA2.5 preparation before the primer was applied. This would be done via shot blasting or vapour blasting. As previous specification, the transformer would then need to be primed with the existing water based two pack epoxy primer.

In conclusion, we feel that this new system incorporating the Rust-O-Thane 9200 would increase the life expectancy to first maintenance considerably. Furthermore, this has made massive financial gains for the manufacturer. It has reduced the downtime and inconvenience for the owners of the transformers enormously.

Have any questions in regards Rust-Oleum’s Rust-O-Thane 9200 or specialist coatings including transformer paint? Contact our technical team to discuss your requirements today on 01462 421333.