This narrowboat was one of the first five of this boat type to be coated. The unique Zinga cold galvanising cathodic-protection system was on both the interior and exterior surfaces of the steel hull shell.

The Wild Cherry was originally coated in the Zinga system back in the summer of 2005. Her owners chose to use the Zinga cold galvanising system to lower the cost and effort of having the boat lifted out of the river every three years. Usually, narrowboat’s require 3 yearly maintenance via re-blasting and re-painting.

Leaving the Zinga system alone for 12 years, in 2017 “Wild Cherry” was finally lifted out for inspection of the propeller and anodes. It was immediately obvious that the hull was totally free of any corrosion. Even the edges of the 10mm base-plate had retained their sharp edges, with no loss of edge or pitting along their length. 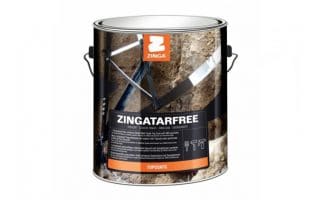 Back in 2005, Zingametall did not have the excellent Zinga Zingatarfree MIO in their product range. Typically, MIO coatings are used on many boats, both large and small. In recent years, Promain would suggest the use of the new Zingatarfree system.

Due to the limited options for a long-life system that was compatible with the Zinga layer, it was decided to use the Jotun Tie-Coat 100 Epoxy Primer. The finishing coat was Jotun Ballastic.

Jotun specialise in a wide range of corrosion protection coatings that can be purchased via our website here.

While cruising the rivers and canals over the past 12 years, there was minimal damage found. The only damage sustained was on the top rubbing strake, which is inevitable on narrowboats. This is due to narrowboats passing through many concrete-sided locks during their lifetime.

However, despite the heavy ‘graunching’ of the strakes along the concrete lock-walls, the only repairs to be carried out was a bit of filling on the deeper gouges. This was then recoated with the primer and topcoat. All of this was carried out by the owners over a few days whilst the boat was up on wooden blocks.

The worst wear factor to be experienced in UK rivers is normally during the summer months when the rains produce run-off from farmlands. Generally, a lot of sand and soil is suspended in the water as the rivers flow. This abrasion is what can normally erode paint coatings on river-boats.

The freezing-cold water temperatures in the winter months and the warmer water in summer also causes some paints to start breaking down a bit, often due to layer and inter-layer stresses.

On the following photographs of Wild Cherry, it can be seen that the hull-blacking paint has worn off in some areas, eroding back to the red epoxy primer layer. However, on the hull, on the weld-areas along the rubbing-strakes, along the base-plate welds (and edges) and also on the rudder, there is no corrosion to be seen whatsoever.

The above photographs were taken on 9th September 2017. As you can see, they clearly illustrate the fact that after 12 years of cruising the rivers and canals of the UK, the only requirement demanded for this boat is another fresh application of hull-blacking paint. Then the boat is ready to go back in the water.

Compared to the usual lifting out every three years, this boat has cost nothing except a cranage-charge in 2010. Usual charges include cranage charges at a fixed cost of £1100, as well as re-blast and re-paint costing a few hundred pounds a time.

One point to consider is to check the propeller and anodes. Narrowboats coated with Zinga do not require mid-ship or bow anodes. They only require two (8kg) anodes in the stern to protect the propeller and prop-shaft.

If you have a boat that could benefit with being cold galvanised, contact our technical team for further advise. Zinga have a long history in providing cold galvanising paint to marine vehicles and Promain are proud to offer their full range of products.

The full Zinga cold galvanising range can be found on our website here:
https://www.promain.co.uk/manufacturers/zinga.html

In conclusion, have a look at our other marine articles: