A residents association of a series of coastal apartments recently contacted Promain for advice on repairing their external rendered concrete walls. The walls had become damaged due to water ingress. The walls currently do not have a coating applied.

They had a number of requirements from the new paint coating that included a high protection against weathering due to the coastal location. In these environments, there is a higher concentration of salt in the air.

Due to the exposure from the wind, the effects of the salt damage was intensified. Also, pollution from vehicles parked in the area alongside the building meant the coating needed to be an anti carbonation coating to cope with the carbon dioxide from the exhausts. The clients main criteria however was the durability, and most importantly, a smarter and less tatty finish than the current fascia.

Initially, the Promain technical team had suggested both paint and external render systems from either Keim or Mapei. However after further discussion, it was decided that a Mapei system would be more cost effective for the residents group. Due to the nature of the project, Promain requested a technical representative from Mapei to visit the site to perform an inspection. This inspection uncovered a series of issues overlooked by the client which were causing the underlying issues with the fabric of the building. These issues are pointed out in the site visit report below.

The apartments are located on the seafront of the village of Mortehoe in Devon.

The wall areas had suffered considerable weathering damage, which was largely due to the premises being in close proximity to the sea. The poor design, and possibly a lack of maintenance over the years, had also exasperated the situation.

Upon first impressions, it appeared that the external wall had been covered with Tyrolean. This product has often been used globally as a cheap, quick, exterior textured wall coating. Tyrolean is often applied to poor quality surfaces in order to hide brick or external render underneath. However, without proper topcoat protection, it is not usually ideal for coastal environments.

Tyrolean repairs are often required due to the inflexible wall covering cracking over time. This can happen as the wall becomes brittle with age. The inspection photo’s below are a good example of this.

Both Mapei and Promain have surveyed many properties in the past with this particular problem. Sometimes you can find the Tyrolean is so brittle it simply falls off when pulled by hand.

The inspection found that the external staircase leading to the apartments had some mould ingress as well as cracking to the render. In addition, the coping stone had also suffered with mould growth.

However, in this section, the coping stone had sufficient overhang to protect the rendered area below. Although, other areas did require pointing to help prevent water ingress.

The coping on the second staircase, had a narrower design. This design choice was not ideal as it was not diverting the water away from the rendered walls. Mapei would recommend replacing this with a more substantial coping. The overhang should be at least 35mm from the finished surface. 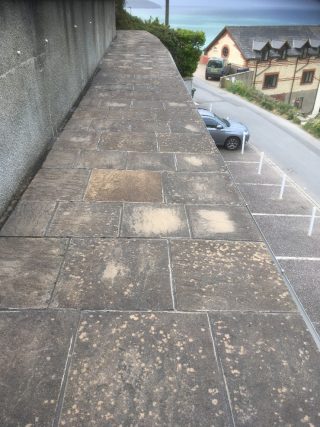 A flat slabbed terrace had been constructed above the parking area. However, upon construction, sufficient drainage had not been allowed for. This is even more vital in coastal regions.

The result of this was that stagnant rain water was collecting and then slowly being released at the back of the deck. This had lead to unattractive water stains on the rendered back wall of the parking bays. 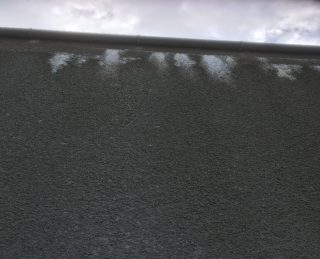 Mapei provided the following options for a protective coating: 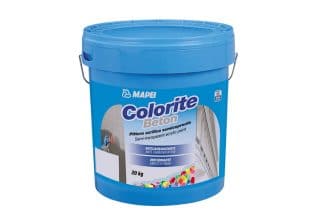 Mapei Colorite Beton is a semi transparent protective coating. This product can be applied to the substrate without altering the appearance of the façade.

The special formulation makes it particularly suitable for protecting surfaces against damage. This includes damage caused by CO2, SO2 and sunlight. It has a long-lasting, durable protection which is also guaranteed by the product’s good repellence to water.

If you are considering changing the colour and appearance of the façade, additional planning may be required. 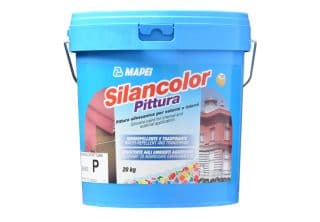 Mapei Silancolor Pittura Plus is a high solids paint which is available in numerous colours. Promain and Mapei recommend this product for use in marine environments. This is due to it’s higher silicon content, and enhanced protection against mould and algae growth. 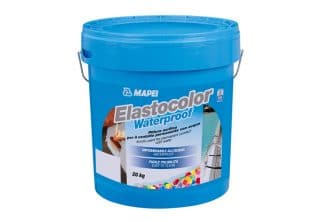 Mapei Elastocolor is a solid paint which has crack bridging qualities. It is based on acrylic resins in water dispersion. Use Elastocolor to protect the surfaces of concrete and cement external render. It will protect against from aggressive agents which are present in the atmosphere. Available in a wide variety of colours.

You can use Mapei Elastocolor Waterproof cement substrates, vertical and horizontal surfaces, flat roofs, special architectural elements (such as domed roofs), water tanks, or surfaces which are not subject to foot traffic.

In conclusion, we recommend they process any that remedial work. This would be before to the application of any coating. This included the repair of all cracks in the surface. In addition they must address the area with water ingress (below the slabbed area). Furthermore, they should install new wider coping  on the relevant staircase.

The entire area would require a fungicidal wash prior to the application of any new coating. This will remove all the algae at a micro porous level.

Carrying Out The Work

They must scaffold the area to carry out the remedial works.  The addition of scaffolding will also allow for a closer inspection. They must carry out the preparation prior to applying the chosen system.

Are you looking at doing your own external render repair? Or do require further information on coatings for coastal environments or tyrolean protection? Please contact our technical team to discuss your requirements on 01462 421333.